In 1971, Father Hogan’s landmark, five-volume work on the American steel industry was published. Having been in preparation for more than 15 years, his Economic History of the Iron and Steel Industry in the United States examines industry developments from 1860 to 1971. Father periodically updated his five volumes with a series of companion books: The 1970’s: Critical Years for Steel, 1972; World Steel in the 1980’s: A Case of Survival, 1982; Steel in the United States: Restructuring to Compete, 1984; Minimills and Integrated Mills: A Comparison of Steelmaking in the United States, 1987; Global Steel in the 1990’s: Growth or Decline, 1990; Capital Investment in Steel: A World Plan for the 1990’s, 1992; and Steel in the 21 st Century: Competition Forges a New World Order, 1994.

Father’s last two books were The Steel Industry of China: Its Present Status and Future Potential, published in 1999, and The POSCO Strategy: A Blueprint for World Steel’s Future, published in 2001 within months of his passing. His final book reflects how greatly he admired the success of the Korean people in starting from virtually nothing to build the world’s leading steel company. During the prior two decades, he had traveled to Korea every year to visit POSCO, to lecture on world steel, and to watch as his friend, Chairman Tae-joon Park and his successors so effectively put into practice his lifetime of teaching about steel’s key role in economic development, an experience that was among the most rewarding of his accomplished steel-industry career. 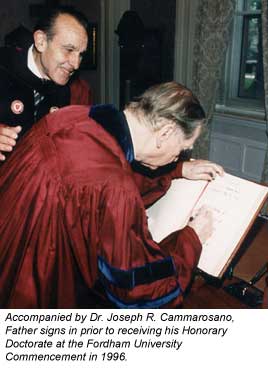 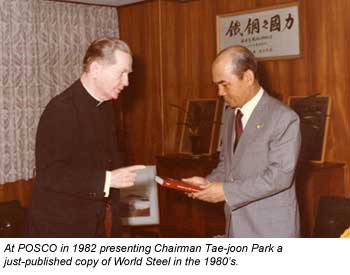 Where he has been

Undeterred by serious health concerns dating from the 1970’s, Father visited most of the world’s steel-producing facilities, delivered papers at conferences, and advised many steel managements. He had the distinction of having attended every annual meeting in what was then the 34-year history of the International Iron and Steel Institute, which named him one of only two honorary members.

In 1985, the American Iron and Steel Institute awarded him the Gary Memorial Medal, the industry’s highest honor, otherwise given only to top steel executives. The medal was presented in recognition of “uniquely distinguished contributions to knowledge that have advanced understanding of the iron and steel industry.” 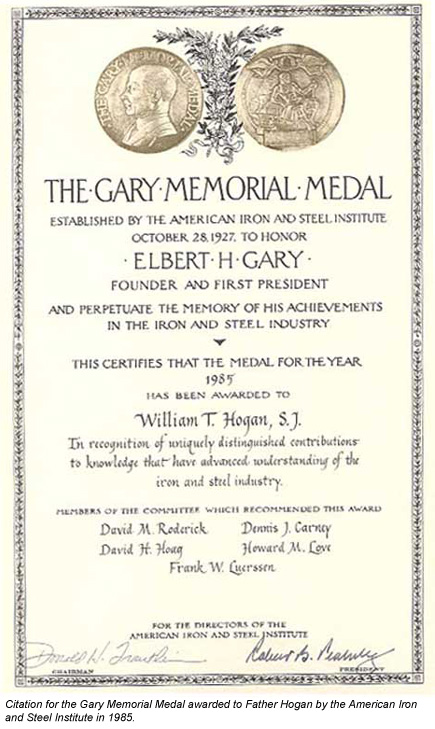 In profiling Father Hogan for Company magazine, Father George McCauley, one of his fellow Jesuits wrote as follows: “The New York Times got it wrong when it called him the ‘Boswell of the steel industry.’ He was its Johnson not its Boswell. He had a vast, direct knowledge of the industry’s intricate workings, from the smelter crews, ironmakers and sheet rollers he’d meet on the mill floor to executives who welcomed him into their lofty offices. He had shrewd insight into the directions available to the industry in the shifting circumstances of supply and demand and in times of fierce international competition. Miraculously, he had the trust of both steel producers and steel importers. Government officials, too, knew they were getting the real goods whenever Father Hogan came before them.

“For all that, the Steel Priest lived up to both sides of that facile sobriquet. His black suit and Roman collar seemed welded to his skin, probably turning a few heads in some circles he traveled.” But knowing the power of steel, he “ saw his work as a way of getting people out of their hopelessness – building lives, putting a little security and dignity within their reach.” At 82 years of age, having taught his final class and having celebrated his final book in December of 2001, Father Hogan passed away on January 12, 2002 , a teacher and steel man to the end.