The “World Steel Files” section of the Archive, representing its largest, consists of 55 archival boxes containing 3,917 document files on the following major steel and steel-related subjects: capacity and production, coking coal, companies in the U.S., countries producing steel, energy, environment, iron ore, labor, markets for steel, minimills, productivity, scrap, service centers, stainless steel, steel technology, taxes and depreciation, and trade. Descriptive summaries of the archived information for each subject category are provided below, in most cases accompanied by an instructive analysis and supportive photographs from the Archive’s photo collection.

During the twentieth century, the world steel industry increased its production of crude steel some 30 fold, from 28 million tons in 1900 to 847 million tons in the year 2000 (tonnages are metric tons). As steel became civilization’s foremost and most basic material, its output growth mirrored and made possible the building of basic infrastructure and the growth of other basic, heavy industries, thereby driving world economic and industrial development in what truly was the “Steel Century.”

In 1900, when electricity use still was very limited and the automobile was widely regarded as a dare-devil’s device, steel was made in only 12 countries, and just four - the United States, Germany, the United Kingdom, and Russia - produced 88% of all the world’s steel. By 1950, after the turmoil of economic depression and two world wars, 32 countries were in the steel business, their output totaling 190 million tons, and the United States had solidified its position as industry leader, producing 88 million tons, or a dominant output share of 46%. The next largest steel industries were located in the USSR and the United Kingdom , which produced 30 million and 18 million tons, respectively, while much of Germany ’s steel capacity had been destroyed during World War II. 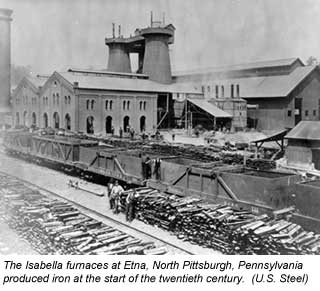 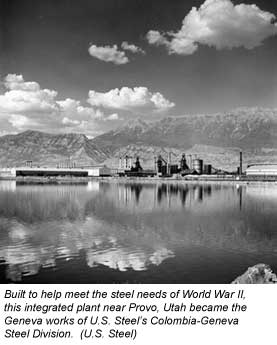 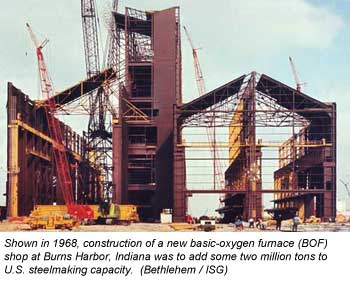 Over the next two decades, yearly world steel production increased more than three fold, and the geographic structure of the industry was dramatically transformed. World output in 1970 totaled 595 million tons, with the United States accounting for 119 million tons, or a much lower 20% share. Although the U.S. steel industry had expanded its capacity, primarily in the 1950’s, steelmakers elsewhere had expanded at a much faster and more sustained pace. The Soviet Union had grown its output to 116 million tons, and strong recoveries had taken hold in the once war-ravaged industries of West Germany and most notably Japan . The latter realized a great surge in steel output from less than five million tons in 1950 to 93 million tons in 1970.

Japan ’s success in building one of the world’s largest steel industries, despite a near total lack of indigenous raw materials, including iron ore and coking coal, was made possible by using large bulk-cargo carriers to supply seacoast plants at deepwater ports. The bulk carriers revolutionized ocean transport starting in the 1950’s and negated the economic law of comparative advantage that once required integrated steel capacity to be located in close proximity to deposits of essential raw materials. This development coincided with the discovery of high-grade iron ore in Latin America, Africa, Australia, and the Far East, contributing to a shift of steel output into developing world regions and more than doubling the number of steel-producing nations to 69 in 1970 from the aforementioned 32 twenty years earlier.

For much of the world steel industry, the 1970’s were a period of boom and bust. In a single year, 1973, world output rose an unprecedented 11% or 68 million tons to 698 million tons, testing the limits of capacity in a number of countries before peaking at 709 million tons in 1974. But the seeds of collapse were sown in the midst of the boom. Steel consumers, worried about shortages, grossly overbuilt their inventories, and in late 1973, the Organization of Petroleum Exporting Countries (OPEC) increased oil prices four fold, leading to declines in world auto output, construction, and spending for capital goods.

The end of the boom came abruptly in 1975, when production dropped 9% to 644 million tons, setting the stage for a further reshaping of the world-steel map over the rest of the decade. Output declines were much more severe in some countries than in others, and some steel industries were affected very little or not at all. The United States , the European Community (EEC), and Japan saw output cuts in 1975 of 20%, 19%, and 15%, respectively, even as steel production in the communist countries and Latin America continued to increase. During the post-boom years, many steel producers in the industrialized world reduced their capacities, while their developing-world counterparts continued on a course of ambitious steel expansion.

World steel output in 1980 totaled 716 million tons, with much of its recovery after 1975 attributable to developing countries, which had increased their combined output 68%, from 60 million to 101 million tons. By 1980, significant gains in capacity and production had been made in most of the developing world, particularly in China, Brazil , and the Republic of Korea , and the number of steel-producing countries had increased to 84. Meanwhile, the United States, which was then removing capacity, had seen its share of world output decline to 14%.

Trends in world capacity and production during 1980-2000 mainly reflected the continuing growth and maturation of developing-world steel industries and the demise of the Soviet Union , which added newly independent nations to the ranks of the world’s steel producers. By the year 2000, steel was made in 90 countries, and t he world’s output that year reached 847 million tons, on track to pass a billion tons four years later. Production at the turn of the century was 131 million tons above the 1980 level, with most of the gain accounted for by just two countries, China and Korea , which boosted their combined steel output by 124 million tons.

China’s steel output, which was less than 700 thousand tons in 1950, had climbed to 37 million tons in 1980, before forging above the 100-million-ton mark in 1996, when China became the world’s number-one producer. In 2000, China melted 127 million tons, followed by Japan at 106 million, the United States at 102 million, and Russia at 59 million tons. Rounding out the production leaders were Germany and Korea , with 46 million and 43 million tons, respectively.

One of the most remarkable concluding chapters of the “Steel Century” was contributed by the Korean steel industry. During the century’s final three decades, what had been a largely agrarian country, which produced one ton of steel in 1953 and less than 500 thousand tons in 1970, drove its industrialization by building one of the world’s most modern and successful steel industries. The Korean initiative confirms that steel’s ability to transform economies remains intact, even after 100 years.